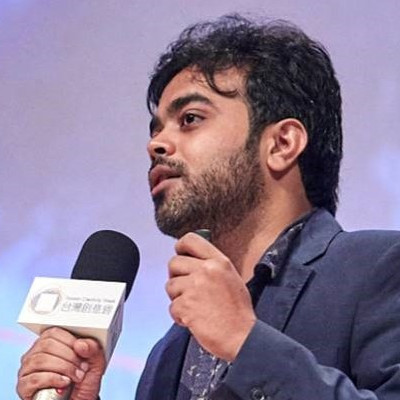 Anirudh is the founder of MIT spinoff Graviky Labs, captured pollutants are then recycled into inks, AIR-INK. Forty-five minutes of automotive emissions is equivalent to produce 30 milliliters of black AIR-INK. The incoming PM2.5 pollution goes under strict quality control and formulated into AIR-INK. Over the years AIR-INK has found its niche globally as a material replacing conventional black inks applied to arts, printing and fashion industry as a means to offset carbon. Till date Graviky has recycled ~250kgs of PM2.5 air pollution waste, which has produced ~1200 liters of AIR-INK, which several art, industrialcollaborators use. Because of his work Anirudh has been on TED, MIT TR35, and Forbes 30 under 30 list of scientific entrepreneurs. As an inventor Anirudh Sharma’s interest lies in deep-tech science based social entrepreneurship- he fuses cutting edge sensor, wearable, and man machine interface technology. In 2010 Anirudh invented a haptic shoe to guide the blind called ‘Lechal’- which was officially launched in 2013. Lechal was the earliest wearable innovation designed for the visually challenged. During his tenure at Fluid Interfaces Group at the MIT Media Lab, Anirudh worked on future fabrication, Augmented Reality with futuristic displays. After returning from MIT, Anirudh co-led the non-profit consortium MIT Media Lab India Initiative with the goal of remodeling and perpetuating self organized design led innovation into the country’s grassroots.