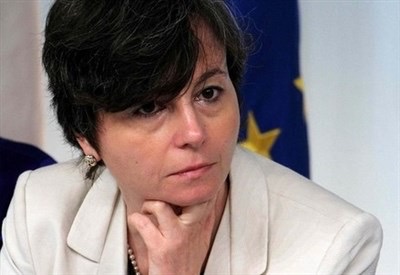 Maria Chiara Carrozza is an Italian Scientist and Member of the Italian Parliament, in the Chamber of Deputies, since February 2013. Currently she is Member of the third Commission (Foreign and European Affairs) and she is Chair of the Panel for the interim Evaluation of the FET Flagships Program for the European Commission, DG Connect.
Since 2015 she has been elected as independent in the Board of Directors of Piaggio Group and partner of IUVO, a spin-off of the Biorobotics Institute, which developed a wearable robot for the assistance in movements.
She has been Minister of Education, Universities and Research from April 28, 2013 to February 22, 2014.
Her political activities are in the area of International Agreements in Telecommunication, Space and Science, and she serves in the Commission for the Agenda 2030 for International Cooperation. She is a member of the Interparliamentary Group for Innovation and she regularly participates in European Interparliamentary Conference on Immigration on behalf of the Foreign Affairs Committee.
Since 2006, she is Professor of Industrial Bioengineering in the Department of Biorobotics at the Scuola Superiore Sant’Anna in Pisa. She was Dean of the same University for two terms, from 2007 to 2013. Maria Chiara Carrozza was Visiting Professor at the Vienna University of Technology (Austria). She is involved in the scientific management of the Italy-Japan joint laboratory for Humanoid Robotics ROBOCASA at Waseda University in Tokyo and is Guest Professor at Zhejiang University in Hangzhou, China.
She is also a member of the Institute of Electrical and Electronics Engineers (IEEE) Robotics and Automation Society (RAS) and of the IEEE Engineering in Medicine and Biology Society, as well as of the RAS Technical Committee on Micro/Nano Robotics and Automation. Maria Chiara Carrozza holds coordination positions and is responsible for scientific matters within several research projects, funded by the European Union’s Sixth and Seventh Framework Programmes (some recent projects are: CYBERLEGs, WAY, CogLaboration, Nanobiotouch, Evryon, SmartHand, Nanobiotact, Neurobotics, RobotCub, CyberHand).
Maria Chiara Carrozza was born in Pisa; she has a degree in Physics and obtained a Ph.D. in Engineering.