Vibrant innovation: reach us at the Imperial College in London

Take a community of problem-solvers, from one of the best universities in the world, and the biggest Italian community of business leaders, then mix them up:  the result will be ‘Ambrosetti Club @ Imperial College London: What Makes a Vibrant Innovation Ecosystem?’.

A new appointment along the Technology Forum path, scheduled on November 19th, from 9am until 5.15pm.

Imperial College stands out for its excellence in teaching and research, it is a major biomedical research centre and has formed the first academic health science centre in the United Kingdom. But Imperial College means something more: it means active collaboration between world-leading research and the industry sector.

Right at the campus there is the Imperial Incubator, where early stage businesses are able to take advantage of being in close proximity to eminent scientists and experts in technology.

Moreover, there is the Group, also known as ‘Innovations’: it was founded in 1986 to protect and exploit commercial opportunities arising from research undertaken at the College. In 1997, the Group became a wholly-owned subsidiary of Imperial College London and in 2006 was registered on the Alternative Investment Market of the London Stock Exchange, becoming the first UK University commercialization company to do so.

To take part to the meeting, and to know the insights of one of the most vibrant ecosystems in the world, please contact chiara.piloni@ambrosetti.eu 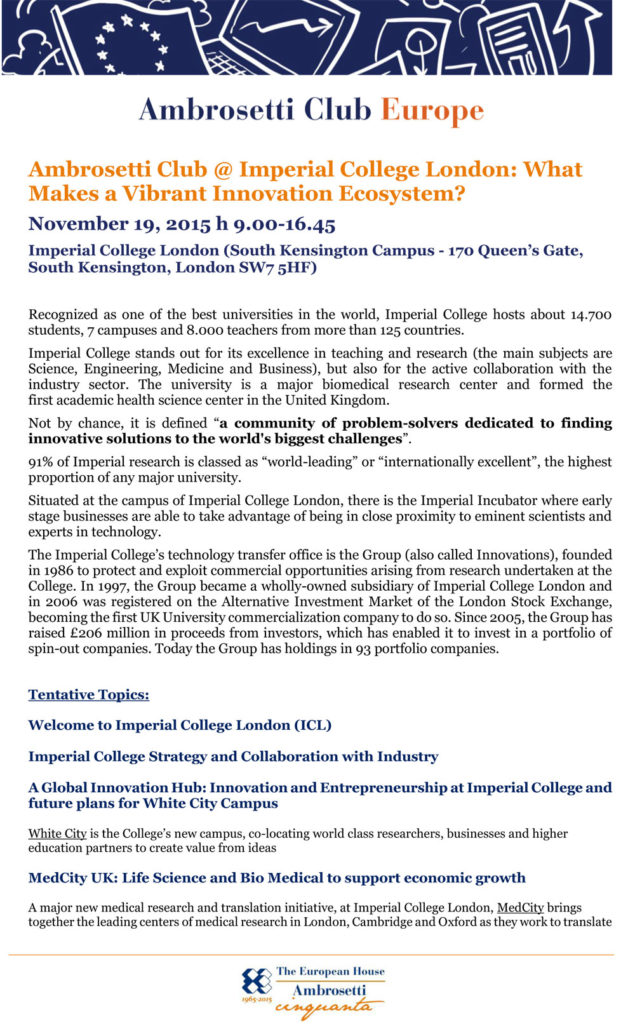 Meeting at the Imperial College: Invitation and Topics