From #techforum16 Preview the Recommendation for improving Horizon2020

The InnoTech Community of Ambrosetti Club has had very involving meeting, last March at CastelBrando. It was the Technology Forum 2016 Preview and it was entirely dedicated to the financial instruments included in the EU program Horizon2020.

All the participants agreed that the program is working well, thanks to its strong attention on innovative SMES: it particularly stands out for being simple, focused and streamlined – without requiring the formation of consortia.

But the meeting went a step over: it dedicated a growing attention to the SME Instrument and it produced some important recommendations for improving it.

The SME instrument assigns a contribution to growth up to 2.5 million per company: a tool that only between 2014 and 2015 has recognized to Italian companies over 45 million Euros and that in the 2016-2017 biennium will be increased in resources of 44%, for a total amount of about 740 million Euros.

The Technology Forum preview has followed a dual track: on the one hand, the deepening of the knowledge of the SME instrument, with the involvement of the European front – who designed it and who runs it, with the evaluation of projects and the allocation of funding . On the other hand, the testimonies of some entrepreneurs who are directly dealing with the instrument and can then describe it in terms of demand.

The subject was placed in the path of the InnoTech Community, starting from an observation about the participation of Italian companies: they operate in a very competitive credit environment – compared to the European context – and they should therefore apply with greater determination, in order to have access to such an important financing channel so important.

The Preview of the Technology Forum has analysed the reasons for the Italian performance, which is certainly affected by a knowledge sometimes vague and imprecise of the SME Instrument, and has gone further, advancing some recommendations to improve it.

The Recommendations will be part of the final Position Paper of Technology Forum 2016: here below you can already find them, in their full version (Italian). 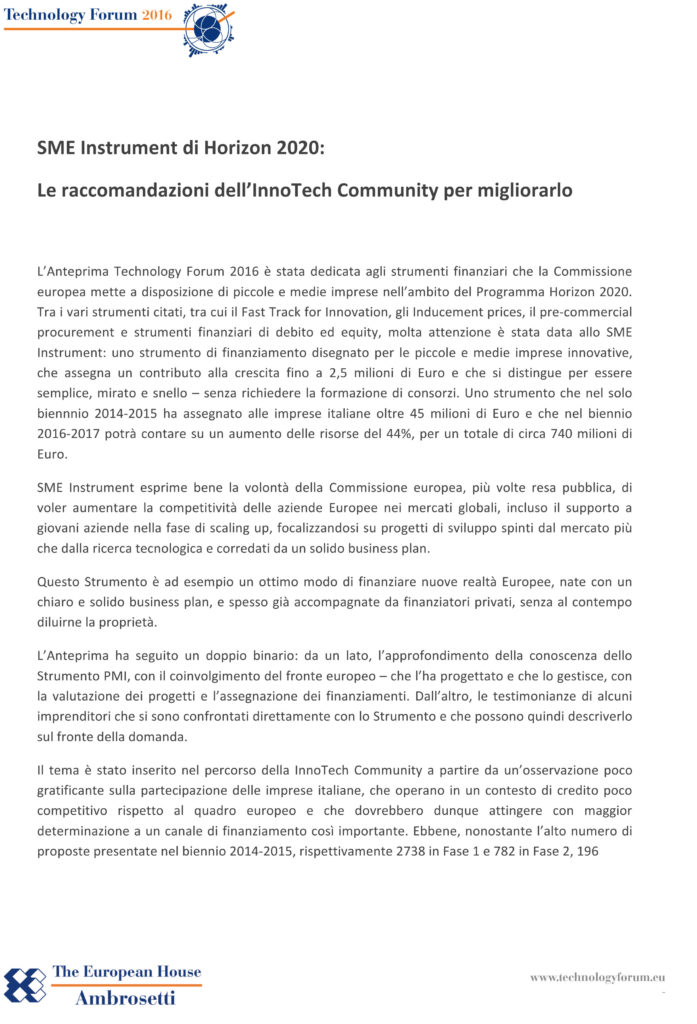